Your browser does not currently support JavaScript.

If your are using Netscape 2 or later then you can enable JavaScript.

With Internet Explorer 5: Go to Tools Menu|Internet Options, Security Tab and click on the Custom Level. Then select disable active scripting under the scripting section.

Why the panic unlike anything we have seen before?
When studying any issue or situation, I am always drawn to the “why” around reactions and events versus the “what” that gets widely reported. It is always important to provide context and perspective when asking these questions, so this is an attempt to provide some of that context. The assumptions drawn below are simply observations made from the data outlined below.
2009 H1N1 Pandemic (Swine Flu)
Our most recent US Pandemic was the much forgotten H1N1 Pandemic that began in April 2009 and concluded in April 2010. This was one of the most impactful epidemics we have witnessed and was a true Pandemic. So, to review the H1N1 Pandemic by the numbers:
As shown above the H1N1 Pandemic was the most impactful and deadly Pandemic we have seen – specifically in the United States in recent memory. But why did we not see the panic and fear that we are seeing today? How vividly does anyone remember the “Swine Flu” epidemic? I will discuss that more below in the next paragraph as the world has changed in so many ways in 10 years. Before we look at that comparison, let’s look at where we currently stand with the COVID-19 outbreak in the United States.
We have talked about the annual Influenza outbreaks and 16K US deaths that are annually attributed to a virus that has a vaccine. We all know that the highest risk are those individuals over 65 years of age, children, those that are pregnant and those with chronic illnesses and/or compromised immune systems. The Swine flu outbreak behaved very differently as 80% of all virus-related deaths occurred in people on 65 years of age. Why does this matter? The Swine flu was a much greater risk to the broader population versus the current COVID-19 outbreak? So why didn’t we have the same overreaction that we have going on today.
What is so different in a decade?
Much has been made about the responsibility carried by the mainstream media in regard to the current environment of panic that exist with our current situation. As I do concur with that assumption, I do believe that some of it is very much unintentional and more a byproduct of the times we live in today. This society of a 24/7 news cycle and speed of information shared has changed how and what we consume and unfortunately the media has not kept up with the challenges that a bitesize headline will be picked up in social media steams and read without a deeper dive into the story.
Pew Research reports that two-thirds of all Americans get their news today through Social Media. This is the change as that percentage has tripled since 2009. To know that we don’t read thoroughly, but instead see the headline is a dramatic change. We used to see or hear the headline and would read the story or watch the news report and move on.
In 2009:
In 2019:
Add to this environment a hotly charged political environment and a Presidential Election Year and you have the perfect environment for chaos. When you think about 2009? Who was hearing about a Pandemic versus the worst economic meltdown we had seen since the great depression?
Fast forward a decade with the longest economic expansion in US history and the news environment looks extremely different than 2009.
Fear is currently a greater risk than COVID-19
This statement has been repeated by the WHO, CDC, Governors of multiple states, Federal Government Officials and yet largely ignored by the general public. But why? It truly comes down to psychology and human behavior.
Elizabeth Phelps, Harvard University’s Pershing Square professor of human neuroscience reminds us that, “Humans often can develop a robust and pathological fear of things that might not happen, to create realities that don’t exist. Humans can of course overdo it”.
Phelps goes on to observe that, “In the old days, the virus update would be a mention on the 6 o’clock news, but today, it’s tweets and Facebook posts 24/7. Fears can be learned. If you’re communicating with people online who are afraid, that exposure is more likely to invoke fear in you.” The clinical term is call “dread risk” and its power can spin a comparatively benign situation into fear-based overreaction.
This is candidly driving the irrational fear that we are seeing in the US around the COVID-19 outbreak. Dr. Ilaria Capua, Director of the Health Center of Excellence at UF Gainesville reminds us to keep calm. She states, “Panic is the biggest enemy you face in any emergency. Panic can do more damage that the virus”.
State of Emergencies
Fear and panic are put on steroids as “State of Emergencies” continue to be called for in multiple states. We have a responsibility to do a better job of explaining that a “State of Emergency” allows the state or municipality to prepare, move resources and most importantly have access to state and/or federal funding. It allows them to make sure that the funding necessary to act in an emergency is available and ready to be accessed. It does NOT mean that an emergency exists. This has been the biggest problem during the past week from an understanding perspective. Governor Cuomo did a nice job of trying to explain:
https://www.youtube.com/watch?v=7EaUOCpSmDM&feature=youtu.be
Active Cases:
The number of active cases globally currently sits at 45,753, yet the number being reported is the 101,598 total cases. This is just an inaccurate representation of the current situation and continues to get widely broadcast. There has been a full recovery of 55,863 people and over 80% of people that contract the disease have a reported “mild case” of the virus.

The green line below represents the recoveries and you can see that the total cases have begun to flatline as far as growth rate. 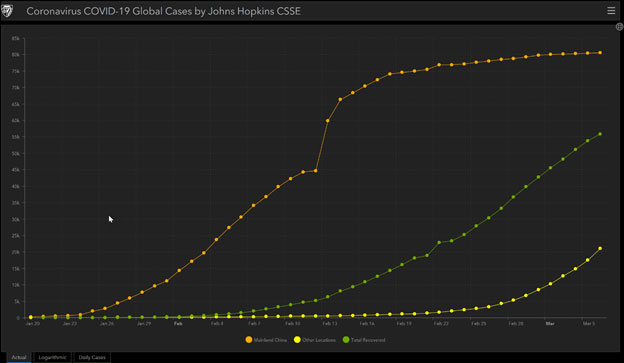 Full up to date active map: